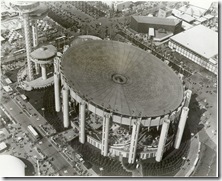 New York Crystal Palace while the Fair of 1939 exuded a “World of Tomorrow.” The World’s Fair of 1964 spanned 646 acres with 140 pavilions. “Peace Through  Understanding” dedicated to “Man’s Achievement on a Shrinking Globe in an Expanding Universe” was the main theme of the fair.

Looking back at the Fair of 64’, two structures stand out as the symbols of the event: the Unisphere and the New York State Pavilion. Both structures still stand today as reminders of the last great World’s Fair. The NY Pavilion was the tallest pavilion in the fair and was also the work of famous American architect Philip Johnson.
The Pavilion was designed by Philip Johnson and Richard Foster and consisted of three main components; The Tent of Tomorrow, the Circarama and the three observation

towers. The “Tent of Tomorrow” was the largest structure and had an elliptical shape measuring 350 feet by 250 feet with the tent being held up by sixteen 100-foot  columns. The tent featured  an enormous mosaic map of New York that was made up of 567 terrazzo panels displaying locations of all the Texaco gas stations in the state. The Circarama, or Theaterama, is 100 feet in diameter  and featured a 360-degree film about New York State and various works of pop art. The most recognizable element of the pavilion was it three observation towers, measuring 60 feet, 150 feet and 226 feet in height. The two shorter towers were cafeterias while the tallest and highest point in the fair was an observation deck, all being reached by capsule elevators which ran up the sides of the towers.

The New York State Pavilion is truly a historic landmark that has slowly been rotting away due to its neglect over the years. The Unisphere has been refurbished and the Circarama is now the home to the Queen’s Theater, but the tent and towers remain in 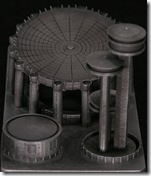 modern ruin. Hopefully there will be a way of saving these structures for future generations to see and learn about. The New York State Pavilion embodies that era’s perspective of what the future could have been.  Obviously we’re fans of the World’s Fair and what it meant, so the best way to capture the essence of this specific fair was to replicate the NY State Pavilion. Our (InFocusTech) model measures 5-1/4 inches by 2-3/4 inches and stands 3 inches tall. The Pavilion as well as the Unisphere is currently being featured in the new Iron Man 2 movie.