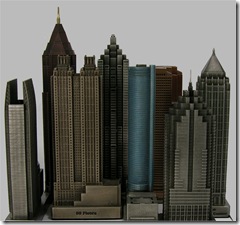 Over the years we have replicated buildings from all over the world, and in no particular order. Many times this leaves us with a few buildings from a major city, but an incomplete miniature skyline. Looking back on the replicas we’ve done, I found that Atlanta needed to be better represented in the souvenir-building department. After the new additions, there are currently 8 of the top 10 tallest skyscrapers represented in pewter. Each model is scaled in 1 inch = 150 feet.