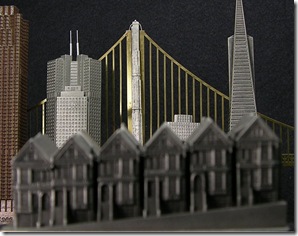 San Francisco is very unique in its range of architectural styles, from the Victorian and Edwardian Painted Ladies of Alamo Square to the Futurist Transamerica Pyramid. We have been able to represent some of the most significant architectural areas in San Francisco such as Alamo Square, The Palace of Fine Arts, the Golden Gate Bridge, the Cliff House and various skyscrapers including the iconic Transamerica Pyramid. Our focus has been primarily skyscrapers, but San Francisco is represented by a more diverse selection of architecture that we have enjoyed replicating in miniature. 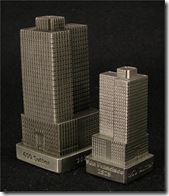 450 Sutter Street was designed by Miller & Pflueger Architects and completed in 1929. Its unique Art Deco style is known as neo-Mayan where it is decorated in hieroglyphics and Mayan carvings from bottom to top. The vertical triangular faceted lines on 450 Sutter later influenced the design on 555 California Street. 450 Sutter stands 344 feet tall with 28 floors. We have replicated this building into two scales, the 1” = 100’ and 1” = 150’ scales.

The Alamo Square model is represented by the famous “Painted Ladies”. This row of houses was built in the Victorian and Edwardian style of architecture between 1892 and 1896 by developer Matthew Kavanaugh. This area is also known as “Postcard Row” due to the frequent use in photographs and

media that depict the city.

The Transamerica Pyramid is the tallest skyscraper in San Francisco and one of its most iconic landmarks. The Pyramid stands 853 feet tall with 48 floors and is built in the Futurist Architectural style. Transamerica was designed by William L. Pereira and completed in 1972. Two scales are also available, the 1” = 100’ and 1” = 150’ scales.

555 California Street is currently the 2nd tallest skyscraper in San Fran but was once the tallest from 1969 to 1972. 555 was designed by Skidmore, Owings and Merrill and stands 779 feet tall with 52 floors. This building has been featured in the movies Dirty Harry and The Towering Inferno.

345 California Street was also designed by Skidmore, Owings and Merrill and completed in 1986. It is currently the 3rd tallest skyscraper in San Fran standing 695 feet tall with 48 floors. 345 was originally to be 100 feet taller but height restrictions bumped it to 3rd on the tallest list. 345 California is also known as “Tweezer Towers.” Both 555 and 345 are available in 1” = 150’ scale.

The Call Building, or now known as the Central Tower, is a skyscraper that survived the earthquake and fire of 1906, but eventually didn’t survive its Art Deco alteration of 1938. The dome was removed, making the Call a drastically different building. The Call Building originally stood 315 feet tall until its dome was removed making it 298 feet now. It was built in 1898 and designed by Reid & Reid Architects.

A world’s fair was held in San Francisco in 1915 called the Panama-Pacific International Exposition. The Palace of Fine Arts is a monument that survived the fair, being reconstructed in 1960, and is still a major landmark to the city. The Palace was originally created for the fair to showcase the fine arts and is only one of two structures remaining from the fair, the other being the Japanese Tea House. Another fair was held in 1939-1940 titled the Golden Gate International Exposition. This fair was held on San Fran’s Treasure Island. The two Elephant Towers were temporary structures that stood as the gateway to the western entrance of the fair. 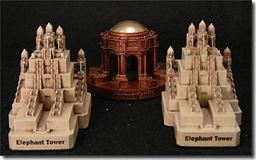 The Cliff House info and pics can be found in our earlier blog post here.

Perhaps the most prominent landmark and representation of San Francisco can be seen in its Art Deco Golden Gate spanning suspension bridge. This bridge is unique in its design and international orange color, making it not only a San Francisco attraction but also an American symbol.