Set back 90 feet from Park Avenue rests a bronze skinned architectural landmark, the Seagram Building. The entire building site is located at 375 Park Avenue between 52nd and 53rd street in New York City, but the building itself only takes up 40% of the area. The Seagram Building (originally was to be named Seagram House) stands 525 feet tall with 38 floors and is clad in alternating bands of bronze plating and bronze tinted glass along with bronze I-beams. Seagram was designed by Ludwig Mies van der Rohe in collaboration with Philip Johnson and is widely recognized as the prime example of the International Style of modern architecture.

The Seagram Building was the first building to have floor to ceiling windows and possibly the first bronze colored skyscraper. Sitting in the open space of the lot are two reflecting pools in each corner. Along the pools running parallel with 52nd and 53rd street were low green marble walls. With all the bronze, marble and many decorative materials used on the interior, Seagram was the most expensive skyscraper ever built at that time. The Seagram Building was also known for its two famous restaurants, the Four Seasons and the Brasserie. Philip Johnson designed the Four Seasons and would regularly dine there.

Seagram is also very significant in that it changed the rules on how skyscrapers could be built in New York City. Skyscrapers had to be built with setbacks at certain heights due to the 1916 Zoning Resolution, but Seagram changed that by providing public space on its ground floor. Any skyscraper that shared a similar design had to abide by these rules. Seagram inspired many more buildings to be constructed in its image, but none really ever captured its iconic feel.

Over the years we’ve (InFocusTech) replicated a few different versions of the Seagram Building into pewter miniatures. Our first model was designed using styrene and balsa wood and it was one of the first replicas we produced. The second model was designed in a more advanced process involving acrylic plastic and laser engraving while our current model’s design was done in CAD and built on a rapid prototyping machine. Seagram is a replica that shows the evolution of InFocusTech’s souvenir building technique. 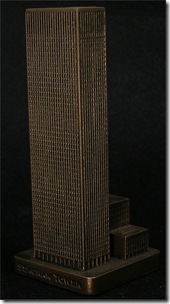 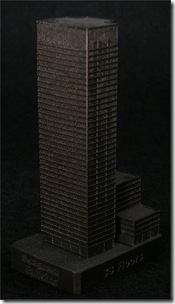