Resting virtually invisible from Ponus Ridge Road is the home of Philip Johnson, the Glass House. Philip Johnson started the schematic design for the Glass House sometime in 1945 and the following year purchased 5 acres of land in New Canaan, Connecticut. Designs were finalized in 1947 with groundbreaking in 1948 and completion in 1949. 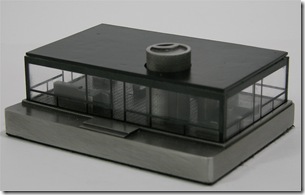 The Brick House, the guesthouse and seemingly opposite of the Glass House, was built at the same time. This structure differed in that it was almost completely enclosed in brick except for the skylights and three small circular windows to its rear. The Glass House is a rectangular 1,728 square foot building framed with steel pillars with ¼ inch thick glass walls. Another key feature to the house is the large brick cylinder located within that serves as a bathroom and fireplace.

Farnsworth House, which was designed in 1945 and built in 1951. Mies and Johnson would later collaborate on the landmark skyscraper, the Seagram Building. The Glass House sits on a promontory overlooking many others structures of Johnson’s design. Philip Johnson considered the Glass House to be the entire compound, not just the main pavilion. Over time Johnson acquired more land, from 5 acres initially to a total of 47  acres, and in a 50 year span built 11 structures. 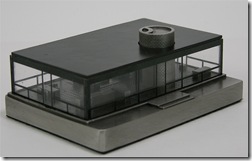 The Glass House is an important piece to modern architecture as well as a model of the International Style. Philip Johnson lived there until his passing in 2005 and ownership transferred over to the National Trust for Historic Preservation. Over the past few weeks we’ve been talking about Philip Johnson and his contributions to the world of architecture and the Glass House fit for a perfect finale to this series of posts. We also decided to create a replica of the Glass House, but in a different fashion. The core of our model and its roof are pewter as all the others have been, but the four glass walls of the building are simulated with clear plastic strips. This feature allows for a better representation of the actual structure and really makes for a one of a kind souvenir. The Glass House replica’s base is 3-7/8 inches by 2-3/4 inches and the overall height is 1-1/2 inches tall. 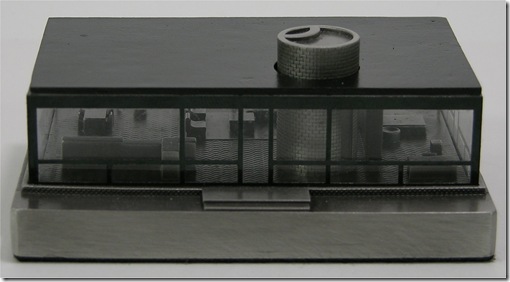