Located in the financial district of Canada’s largest city stand two famous landmarks, the Scotia Plaza and Canada Trust Tower. Neither of these skyscrapers are Toronto’s tallest, but they may be the most unique and recognizable (excluding the 1,815-foot CN Tower). If you don’t consider the CN Tower to be a skyscraper then

The postmodern Scotia Plaza stands at 902’ tall with 68 floors. This tower is distinguishable by it dark red granite façade and its vertical setbacks. Scotia Plaza was built by WZMH Architects in 1988 and is located at 40 King Street West. The plaza was constructed of reinforced concrete rather than steel with a glass curtain and the tower also features an atrium at the ground floor.

Quite possibly Toronto’s most distinctive skyscraper is the Canada Trust Tower, an 863’ tall tower located at BCE Place. BCE Place or Brookfield Place is a complex that also includes the Bay Wellington Tower and the Hockey Hall of Fame. Canada Trust was completed in 1990 and designed by Bregman + Hamann Architects and Skidmore Owings And Merrill. This 53-story tower is covered in a light gray granite façade and features many setbacks leading to a spire that result in its unique design.

Both of these landmarks were replicated in the 1 inch = 150 foot scale series. The Scotia Plaza stands 6-3/8 inches tall while the Canada Trust stands just less than 6-3/16 inches tall. 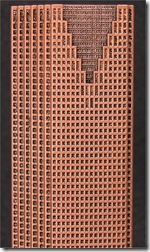