After the sun has set and night creeps into a city, many of the skyscrapers and tall towers can be recognized by their window lights, illuminated signs or flashing beacons, but there is one structure in Barcelona that can be virtually invisible one moment and the next a fireworks display of the color spectrum radiating through the entire city.

This structure is in fact a skyscraper that that rises 474 feet into the sky and is known as the Torre Agbar or Agbar Tower. The Torre Agbar is a somewhat elliptical shaped building consisting of 33 floors and a large domed top. The Agbar Tower was designed by Jean Nouvel and completed in 2004 in Barcelona, Spain. The inspiration for this skyscraper came from a geyser rising into the air and also from the Montserrat Mountains near Barcelona.

The Torre Agbar was constructed with a concrete core and an outer concrete wall with 4,500 window openings and a façade made of glass and aluminum with blue, green and gray panels as well as red 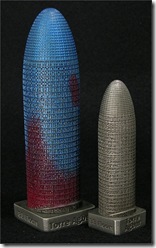 window panels mostly scattered towards the bottom of the tower. The glass façade is the most defining characteristic of the Torre Agbar. Each of the window openings is covered by an LED luminous device that can generate 16 million different colors and many different images. An example of just how cool this building looks can be found here. The Torre Agbar has become a symbol of New Years Eve around the world and a very nice addition to the beautiful city of Barcelona.

The Agbar Tower is one of my favorite skyscrapers and so we created a scale building replica of it.  We previously released a building very similar to this one called 30 St. Mary Axe in London and really didn’t expect to replicate another building of this shape until I saw a video of it in action. The awesome display of colors and images sold me right away and even in the daylight the building is very unique with its bluish skin accented with red colors that climb from its base. 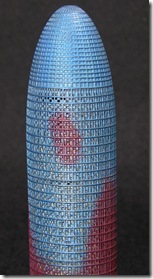